An Interview with Lenn Johnston 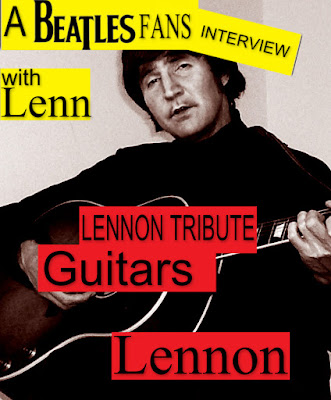 This time we have an interview with John Lennon's 21st
century body double.... Lennon Tribute artist Lenn Johnston.
From writing lennon style songs, to looking like him,
he really does give it his all. And as these photos will prove he is
Pretty close to the real thing!

How long have you been a lennon tribute for and how did you get
into it?
Since 2002 I've been paying tribute to John Lennon, first as an actor and
author, then gradually as a musician, as I studied guitar, harmonica and
keyboard. But first I had to make myself a sandwich, you see.  Actually, this
goes way back to childhood and subconsciousness. I've been a fan of
Lennon and The Beatles since I was a toddler.  My brother, who was almost
two decades older, played Beatles records at home. I immediately took to
them as "the real deal".
John Lennon was the one I gravitated toward, because of his wit, his look,
and his take-charge, smart-aleck, no-nonsense attitude. I knew he was the
right guy.  Later, in high school, people started telling me I looked like
him.  I got a bachelor's degree in graphic design and started up careers
in acting and voice-over, not even realizing at the time how these paths
would focus me right back into John Lennon's character.
You have many many Lennon inspired outfits, how many do you have and
what are your favorites?
Look at what I have to live up to!  John Lennon was not just a rock star, film
star, visual artist and spiritual-political leader, he was also a fashion icon!
So I get to wear great outfits.  And shouldn't we all be excited about the style
and colors of what we wear?  Most of these costumes, about 15 or so, have been
a combination of custom tailoring and being lucky at thrift stores. My two
favorite looks or outfits are for 1966 and 1967.  Those seem to be the ones I can
carry off best. Many people tell me my "Pepper" look is best. To make it truly
authentic, I grow a real mustache, but if I have to perform in a show where there
are costume or period changes I don't have the luxury of a time machine
for mustache growth...yet. For this  look I have a few outfits, including a dark
suitcoat, striped scarf, and psychedelic pants like what John wore in the Penny
Lane film.  It's great fun getting into costumes and walking around New York.
People go crazy!   At first, they stare and nudge each other, then think about
approaching and talking with me. Some just say, "Hey, John!" in passing.
It's as if most everyone wants him back. Seeing and hearing Lenn, they feel the
past is healed and the future for John Lennon's life has materialized! 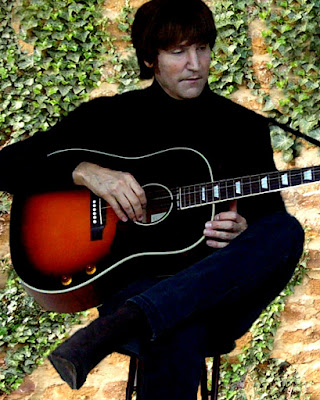 How did you get into doing your radio show?
A professional bass-player friend who DJ's on a radio station recommended
that I start a radio show. He thought I'd be a natural because music is one of
my passions. He was right: I really took to it, and my being a natural s
mart-alec helps it all come to life. I do it especially because John Lennon
had wanted to do this later in his life. It's been great fun, and I've had
the opportunity to meet and interview amazing people.  Ivor Davis, the
Beatles exclusive tour reporter 1964-66, was phenomenal, and I had to
do a double show, because there was so much material.  He was so kind, warm
and giving in his manner!  In fact, I'll be doing another interview with him
again soon.  Tony Bramwell, the Beatles road manager/CEO of Apple
Records, provided so much amazing interview material I needed two shows.
He was great!  Gurudas, a close friend of George Harrison and John Lennon,
was an incredible encounter, even a spiritual one. A beautiful person.
All these guests and others were very funny and entertaining, too!  And every
time I interview one of these people who knew the Beatles personally, or were
present back in the day, I feel John's spirit more.  Now, the radio show is a lot of
work, taking all my time during the week, writing, interviewing, editing,
choosing the best songs, and producing, but it's a very enjoyable experience.
John Lennon not only dreamed about doing this: he wanted also to be a TV
talk-show host!  He appeared on WNEW radio in NYC and WFIL in
Philadelphia, and also hosted The Mike Douglas Show for a whole week. I
am sure he would have become a great TV talk show host and radio DJ,
had his life not been taken. But that's why I'm working to create a TV show
for John, too!
Whats your favorite lennon song?
Oh, there are many. It's hard to break it down into one specific song. For
his solo years, I love IMAGINE, for his early years, I love A HARD DAY'S
NIGHT, for the middle period, I would say NOWHERE MAN, and for
the Pepper period, STRAWBERRY FIELDS. 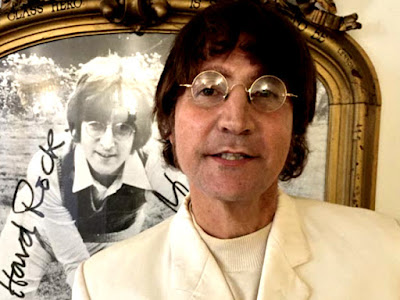 How many guitars do you own?
I own a Rickenbacker 325, an Epiphone Ej160 flattop, an Epiphone Casino,
a couple other acoustic guitars plus a semi-hollow Epiphone electric.  And
of course, I have a few harmonicas and keyboards! Not enough to open a music
store mind you, but enough to keep the neighbors awake when I blast a
Lennonesque rendition of SILENCE IS GOLDEN at 3:00am.
Where does John lennon end and Lenn Johnston begin in day to day life? is
there much a difference to your tribute character to yourself?
I think at about the hip, that's where it all began. The more I discover
about John Lennon, the more I see the similarities in our values for social
change, world peace, a non-toxic planet, not to mention the need for great music
and art, and to be a smart-alec. :) I write original songs in the style of John
Lennon/Beatles, hoping to provide the world some of what John Lennon
would be saying now. My first CD, VILLAGE IDIOM  has a few of my
originals plus an audio version of my book of the same title. (VILLAGE IDIOM
can be ordered through my website, TributeToJohnLennon.com .)  The stories
resonate with Lennon's books A Spaniard
In The Works and In His Own Write. Funny note there: like John, I've
always twisted and mangled language to make more of it, even since
I was a small child, annoying the adults. 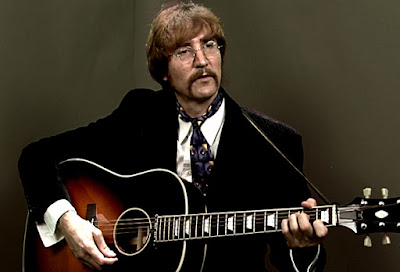 Would you ever do a regular lennon vlog?
Actually, for years I've been wanting to do this. There are so many
projects on the boil and I never seem to find the time to vlog. One day in the
future, once I get past the other big things on my plate: a theatrical play, radio
show, TV show, and so on, I hope to vlog Lennon.
What was your favorite gig you ever played?
Anytime you can get a show that runs a long time, it's very GOOD! I performed
a show in California that ran for 3 months and got wonderful reviews
and huge appreciation from fans!  I would like more just like this! 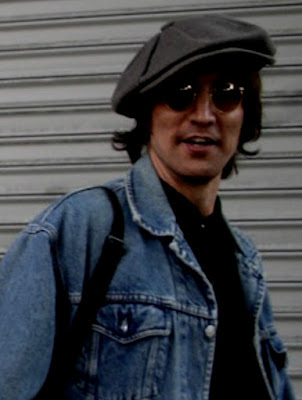 Apart from singing and guitar, what are other things your enjoy in
day to day life?
I love illustrating and doing graphic design, along with video production,
and am working on my next book as I have time. (Samples of my illustrations
can be found on my site as well.)  I love creating an organic, heirloom garden,
growing things that may no longer exist unless we keep Mother Earth's
growth cycle going. I also have pets who are my kids!
And I like to do inline skating. But all these things take second place to
bringing John back into the world for all to see and hear. 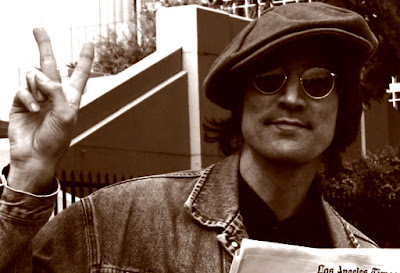